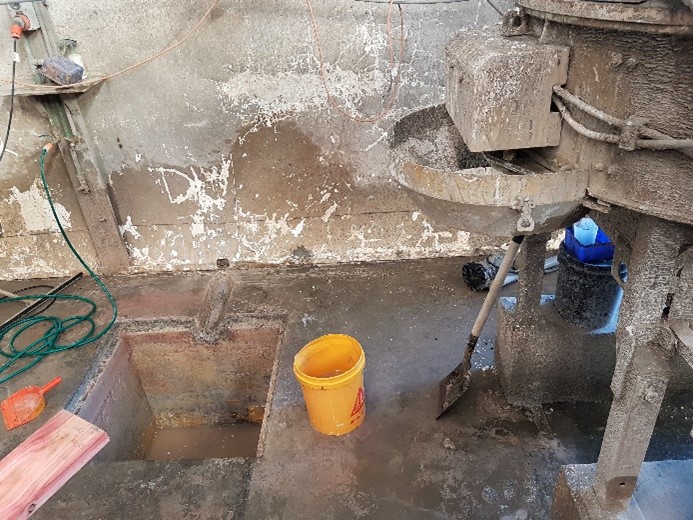 In the previous article, Iain Hobson from Liquidstone Limited in West Auckland, shared some of the learning from the KAIZEN™ journey he and Jon Williams encountered. In this article he continues to elaborate on how structured problems solving made a significant impact on the business.

One of our major advantages is that we operate our construction business, Liquidstone Ltd., from a purpose-built factory with a built-in water reticulation system, allowing us to recycle up to 80% of the water used in production of concrete. This system is designed with a network of open drains that flow to pits dug low into the floor, called sump pits. The main sump is approximately two metres deep and situated adjacent to our largest concrete mixer. The water from cleaning the concrete mixer is washed down into the pump where the solids settle to the bottom. Subsequently, the water can be pumped back into the main settlement tanks for recycling. This is a simple and effective, low-cost system, theoretically requiring little or no maintenance.

Nevertheless, during one of our KAIZEN™ sessions it became the focus of discussion; the mixer was a broken bird (more on that later). Overtime, as we became busier, the solids in the sump pit required emptying on an ever-increasing frequency. We attributed this to the fact that we were mixing more concrete as we got busier with all the new sales. People in construction, as a general rule, are natural problem-solvers and are quick to propose practical solutions. And so it was, and still is, in our business.

The sump required more frequent emptying, wasting valuable time while cost was blowing out of control. People at all levels were frustrated. With endless discussions and implementation just leading to increasingly complex solutions. Emptying the sump during the normal course of operations, simply required calling the ‘sucker truck’ to visit and ‘Frank the tank’ would suck the solids from the bottom of the pit. This costs around $1,500 per truck load; fine if you only have to do it occasionally, but we now needed the sump sucked out on almost a daily basis! Definitely too costly for a business struggling with cash flow. 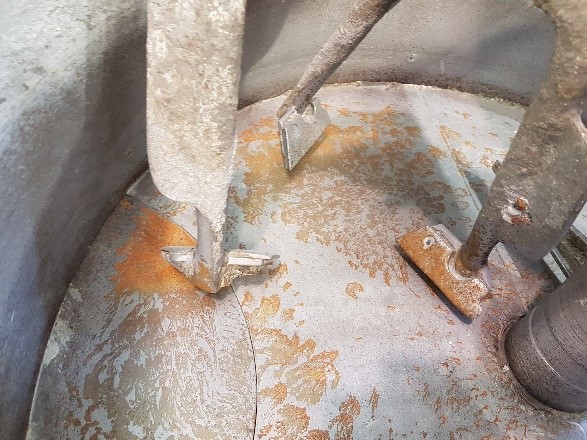 After many, many attempts trying varying cheaper alternatives (digging out by hand, fabricating a steel box that could be craned out and dumped into a skip, etc.), we finally sat down and quietly went through a ‘5 Whys’ exercise that Kaizen Institute taught us. Effectively ‘5 Whys’ forces you to firstly define the problem you are facing (often the hardest part) and when this is done, keep asking ‘Why’ until the solution presents itself. This is how ‘5 Whys’ unfolded in this scenario:

“We hate having to empty the sump every day, it takes two to three guys almost ½ day to dig it out by hand! We can’t get our normal work completed on time and I’m scared there will be an accident or injury if we don’t get it sorted” said one of the braver members of staff.

“Why do we have to empty the sump every day?”

“If we don’t, it will overflow”

“Why is it overflowing?”

“Because of the solids in the bottom of the sump”

“Why is there so much solid material getting into the sump?”

“Ok, I think I understand, but why is there so much solid material left over in the mixer after each concrete mix?”

“Ahh, I’m not sure. Maybe the mixer blades might need looking at? Let’s take a look.”

And so the solution, based on a root cause, presented itself. With all of the new work going through the concrete mixer, the mixing blades had worn down to a point that they no longer scraped all of the concrete off the sides and bottom of the mixing bowl, leaving a significant amount of concrete solids left to be washed down into the sump.

A new set of blades, and some basic maintenance, et voilà! Problem solved! No more excess solids washed down into the sump. No more expensive sucker trucks, no more risking lives and limbs every day to dig out the pit manually. The added benefit was our yield per mix went up, our waste disposal costs went down and our productivity increased. The instinct to jump to a solution remains strong but this valuable lesson will hopefully always stay with us; first pause to spend the time to define the REAL problem. Also, get the right people involved; people who are directly impacted, and only then carefully apply ‘5 Whys’ to reach your solution.

Since July 2020 our monthly water bill reduced from around $1,800 to $80; a stunning improvement! Coupled with a rewarding reduction in cost, saving our precious natural resources, and lifting employee motivation gave a strong impetus to our endeavours to excel.

The Value of a Broken Bird

Even before we engaged Kaizen Institute New Zealand, my soon-to-be business partner and I attempted to apply some basic principles to our company processes. We were particularly interested in the idea of a ‘value stream.’ I’m pleased to say that we now understand our ‘value stream’, which is the combination of all processes (end-to-end). This is where we add the mandated value for our customer. However, this is also where we experience and identify those wasteful activities which must be eliminated. This knowledge was absent in those early days. Developing this understanding required Jon (my business partner) and Ito map our value stream; from the first point of contact with a customer, right through to the pre-production process, manufacturing, delivery, installation, and getting paid.

We set about this mammoth task by investing in a stack of Post-it notes. Whenever we identified a new process in our system, it was written up in marker pen on a yellow square of paper and stuck up on the office wall. In no time at all the office walls were plastered with yellow Post-its and we hadn’t even got past the basic office functions! Purely by coincidence, positioned on a shelf at the beginning of the new yellow graffiti wallpaper, was a small sandstone carving of a bird. The bird was a memento from a long-forgotten trip to Egypt, and somehow it ended up sitting on the shelf, gathering dust having seen better days. At some point the bird’s head had been broken off and lost, hence it became known as the ‘broken bird’ (we are, after all, concrete artisans, not poets!)

Frankly, the task of sorting out our processes was overwhelming and we were forced to prioritise which tasks we would address first, and so the broken bird was called into action, being placed above or alongside the current priority. Instantly it became a visual identifier of the most important issue we needed to resolve at any one time. Anyone of us walking into the office, could see straight away what we should be working on next. The message of the broken bird was occasionally reinforced with A3 posters, fixed in prominent positions around the office (including the back of the toilet door!) shouting “QUOTES” or “FORMWORK,” etc. to show our biggest concern.

The broken bird became the symbol of identifying and prioritising problems, large and small, and reminded us to stop and fix the process, and to standardise the better way, The actual broken bird has long since disappeared, but you will still see, scattered around the office and factory, yellow Post-its and hear the odd reference to the small Egyptian hand-carved sandstone bird, an anecdote of the deeply embedded KAIZEN™ habits at Liquidstone Limited.

To enquire about creating your own exciting KAIZEN™ journey towards excellence, please contact Kaizen Institute at nz@kaizen.com

Your business might be eligible for New Zealand government funding through the Regional Business Partner Network or through Callaghan Innovation. Kaizen Institute New Zealand has been a proud service provider for almost a decade on these two highly valuable programmes, supporting local businesses to succeed and thrive.

older
Back to overview